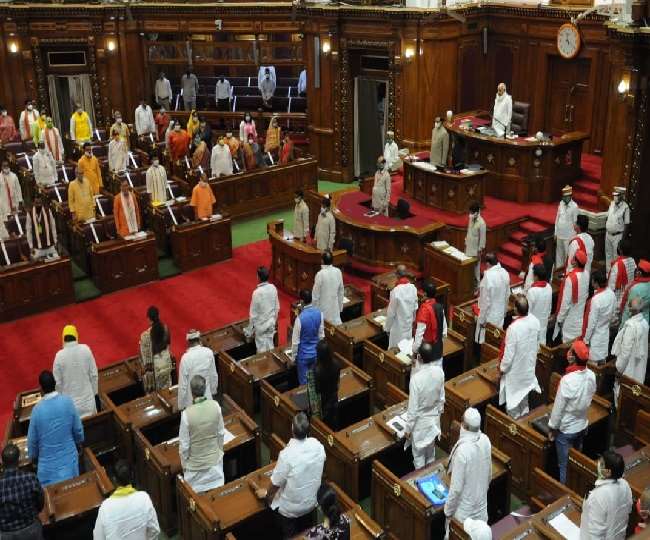 Lucknow. In the monsoon session of the Uttar Pradesh Legislature, action could not be held for the second day today (Friday). As per the decision taken in the all-party meeting, the house will be postponed after paying homage in the mourning of MLA Janmejaya Singh. Saturday will not be a holiday. Today’s agenda will be implemented in the House on Saturday.

Why did Commotion in council happened?

At the same time, during the Question Hour in the Legislative Council, during the Corona Transition, Naresh Chandra Uttam of SP demanded a discussion on stopping the proceedings of the House on the ruined law and order situation of the state, the worsening flood situation and the uncontrolled situation of Corona infection. Meanwhile, the SP members came in front of the Chairman and started shouting slogans against the government. Even on the persuasion of Chairman Ramesh Yadav, the SP members did not calm down and slogans continued. The Speaker then adjourned the proceedings of the House for 20 minutes.

Let me tell you, the Yogi Adityanath government, which is convening the monsoon session of the Legislature, was preparing to pass about one and a half dozen bills in the midst of the uproar of opposition on Friday. The Yogi government has made a provision for tougher punishment for cow slaughter this year, as well as setting up a tribunal to compensate rioters for loss of public and private property. Preparations have been made to pass both these bills.

These decisions have been implemented by the government as an ordinance in the absence of an assembly session in the Corona era. Under the constitutional obligation, it is necessary to get the approval of the Legislature within 6 months. In such a situation, the government will pass more than a dozen bills related to these important matters in the Assembly and Legislative Council sessions. After this the Governor’s approval will be taken on these, then all the ordinances will be able to take the form of law.

Opposition in an attacking mood

On the second day in the monsoon session of the Legislature, the opposition is expected to create a ruckus again to surround the government on various issues. On the first day on Thursday, in the meeting of Samajwadi Party, Bahujan Samaj Party and Congress Legislative Parties, a strategy was prepared to raise public issues in the House. Samajwadi members will reach the Legislative Assembly on bicycles from the party office. In the absence of the Leader of the Opposition, leaders like Narendra Verma, Iqbal Mahmood and Shailendra Yadav Lalai will have leadership responsibility.

Samajwadi Party President Akhilesh Yadav has asked to raise voice on issues like crime escalation, irregularities in corona treatment and corruption, fake encounters, electricity and outstanding cane price. At the same time, the BSP members will be attacking the problems of Dalit atrocities, collapsed law and order and the exploitation of the poor in Corona treatment. Congress Legislature Party Leader Aradhana Mishra Mona said that the government, which failed to curb uncontrolled crime and corona, will be surrounded in the House.

Nearly one and a half dozen bills will be passed