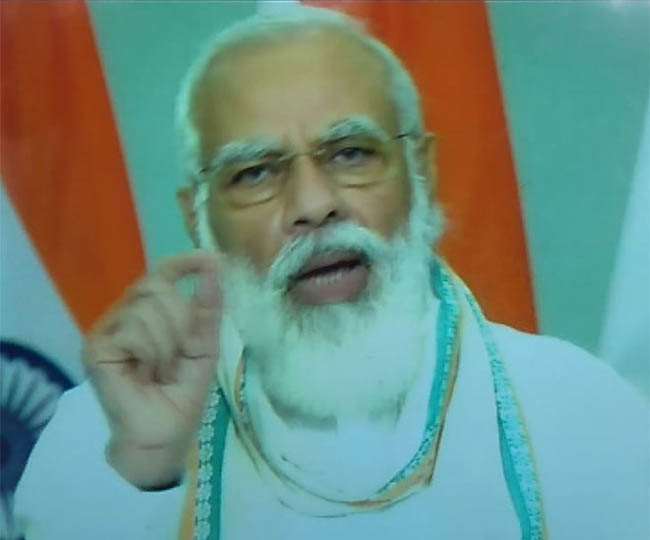 Patna, JNN. PM Modi Bihar Rally: Prime Minister Narendra Modi PM Narendra Modi on Monday again handed over 14 thousand 258 crore projects in Bihar. He also started the rural digital revolution in the state by inaugurating services connecting 45 thousand 945 villages of the state with optical fiber network. Apart from this, the foundation stone of nine projects related to roads and bridges was also laid. In recent times, PM Modi has inaugurated and inaugurated several projects related to rail, infrastructure, bridges, drinking water and irrigation in Bihar. He has gifted 18695 crore schemes to Bihar in 12 days from 10 September till now. These programs of the Prime Minister are official, but they are being linked to the upcoming assembly elections.

Today, the Prime Minister laid the foundation stone of Gandhi bridge in Patna parallel to Vikramshila bridge in Bhagalpur and Ring road in Patna. In addition, he also gifted internet service from optical fiber in rural Bihar.

Prime Minister Narendra Modi on Monday laid the foundation stone of the Gandhi Setu in Patna and Vikramshila Setu in Bhagalpur parallel to the bridge and the four lane bridge at Phulaut in Kosi by pressing remote with video conferencing. The PM laid the foundation stone of nine highway projects worth Rs 14,258 crore. The Prime Minister said that now every village will be connected to the Internet. 45,945 villages of the state will be connected to optical fiber internet services. For this, the PM launched the fiber program.

The Prime Minister said that rail, road connectivity is being increased in all cities of Bihar. 86 years later, Kosi and Mithilanchal met on 18 September. Air services are being introduced from major cities. Air service will start from Bhagalpur too soon. Work on this is going on fast. The Prime Minister praised Chief Minister Nitish Kumar and said that Nitish ji is continuously working in agriculture, roads and others.

Giving information about meaningful changes in the interest of farmers with the new agricultural reform law, the Prime Minister said that they will not end agricultural markets. Also, the arrangement of MSP will continue as before. The government procurement system will also continue as before. Under the guise of the law, some gangs were taking advantage of the compulsion of the farmers. For this reason, change was necessary.

Benefit of digital services will be available in rural areas

34 thousand 821 centers of CSC operating in Bihar will use their work force to connect villages with optical fiber internet. Under this, one Wi-Fi and five free connections will be provided in government schools like primary schools and Anganwadi centers. This project will also benefit digital services to people in remote rural areas. These facilities will be made available by March of 2021. The central government has already connected all 85 hundred panchayats of Bihar with internet service.

The Prime Minister also laid the foundation stone of the Ramnagar-Kanhauli section of Patna Ring Road for Patna. It is a 39 km road costing Rs 913.15 crore.

Roads, which laid the foundation for turning into fourlane

Inauguration and foundation stone of 18695 crore schemes in 12 days

The Prime Minister has inaugurated and laid the foundation stone of various schemes worth Rs.18695 crore in the 12 days since 10 September.

– 13 September: Foundation stone and inauguration of three major schemes worth 902 crore. Under the Paradip-Muzaffarpur LPG pipeline project, the HPCL plant at Harsiddhi in East Champaran and Indian Oil’s Banka LPG plant at Durgapur-Banka area, besides the 193-km Durgapur-Banka pipeline section was commissioned.

Talking to the public before the announcement of elections

It may be known that in the last few days, PM Modi has laid the foundation stone and inaugurated dozens of projects in Bihar. In view of the assembly elections going to be held soon in Bihar, PM Modi wants to make his point known to the public on the pretext of inauguration and foundation stones before the announcement of elections.