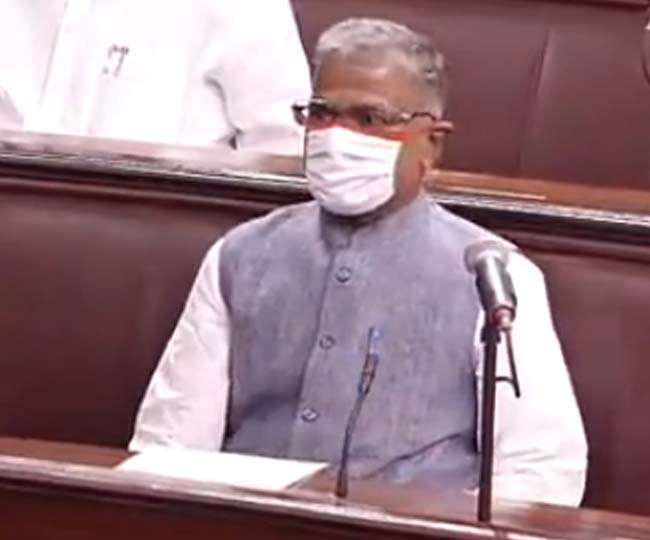 The Parliament’s Monsoon Session has started today, amid Coronavirus Pandemic. All preparations have been completed for this 18-day-long session. This time, many special arrangements have been made to protect against Corona. More than 4000 people, including MPs and staff, have been corona examined. The proceedings of the Lok Sabha have been postponed till tomorrow. At the same time, the Deputy Chairman is also to be elected in the Rajya Sabha today. The opposition has fielded Manoj Jha against NDA candidate Harivansh. However, it is considered certain to win the election of Harivansh in terms of mathematics in the Rajya Sabha.

The Lok Sabha Secretariat said that 359 MPs took part in the proceedings on the first day of the monsoon session.

On the Corona virus, Health Minister Harsh Vardhan said that maximum number of cases and deaths have occurred mainly from Maharashtra, Andhra Pradesh, Tamil Nadu, Karnataka, UP, Delhi, West Bengal, Bihar, Telangana, Odisha, Assam, Kerala and Gujarat. He said that because of our efforts, there was a drawback in limiting the corona in the country. There are 3,328 cases per 55 lakh population in India and 55 deaths, which is less than other countries of the world.

BJP MP Ravi Kishan raised the issue of drugs in the Lok Sabha. He said that the problem of drug trafficking was increasing. Conspiracies are being hatched to ruin the youth of the country, our neighboring countries are contributing to it. Drug smuggling is done every year from Pakistan and China. It is brought via Punjab and Nepal. He said that drug addiction is also in the film industry. Many people have been caught, NCB is doing very well. I urge the Central Government to take strict action, nab the culprits soon and punish them.

Responding to the Congress charge on the question hour issue, Defense Minister Rajnath Singh said that I have also talked to many leaders. We have to take the proceedings of Parliament in exceptional circumstances. The House will run for 4 hours and I requested that there be no Question Hour. Have a zero hour for half an hour. Rajnath Singh said that the decision was taken only after the consent of the leaders of most political parties.

Congress MPs Adhir Ranjan Chaudhary and K Suresh have proposed a stay in the Lok Sabha over Chinese infiltration in East Ladakh. On the other hand DMK and CPI (M) have given notice of adjournment in Lok Sabha regarding ‘suicide of 12 juvenile students due to NEET examination’.

The government will also introduce 11 Bills in this session. The Congress has declared open opposition on four of these Bills. Senior Congress leader Jairam Ramesh said that out of the four bills decided to protest, three are related to agriculture and farmers. One bill is related to finance, which proposes changes in the Banking Regulation Act. At the same time, the bill related to agro marketing is also opposed by the states of Punjab, Chhattisgarh, Rajasthan etc.

Parliament’s view will be changed

Before Tuesday, the Rajya Sabha and later the Lok Sabha will meet for four hours each.