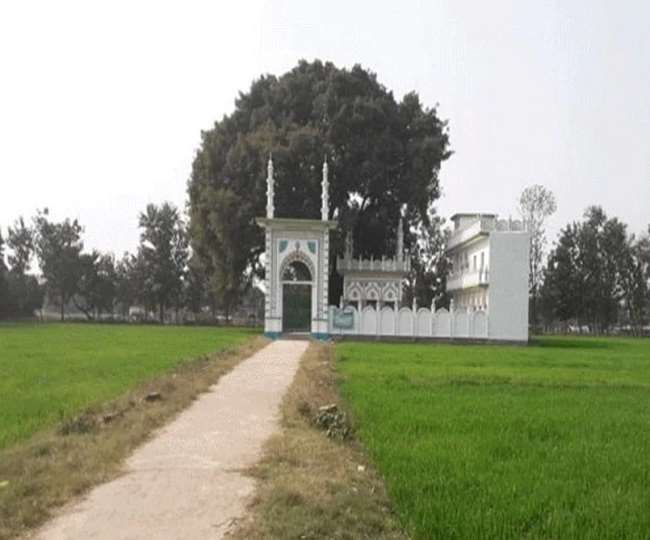 Ayodhya, JNN. The long-running dispute over the Ram temple and mosque in Ramnagri Ayodhya has ended after the Supreme Court’s decision. After the Bhoomi Poojan of Shri Ram Temple on August 5, now a mosque will also be built in the area of ​​five acres here. The Ayodhya district administration on Monday gave possession of land for the mosque to the Sunni Central Waqf Board.

After demarcating the five-acre land of an agricultural farm at Dhanipur in Sohawal, the construction of the mosque was handed over the possession to the U.P. Sunni Central Waqf Board. Here Naib Tehsildar Sohawal, under the leadership of Vinay Kumar Barnwal, spent about four hours in metering. After the Supreme Court’s decision, the district administration has made available land to the Sunni Waqf Board in the farm department of the Agriculture Department in Dhanipur, the gram panchayat of Sohawal block. The measurement was done here in the presence of Waqf Board representative Farhan Habib.

According to the Naib Tehsildar, the measurement of land for the mosque was given possession. The land will be arranged by Sunni Central Waqf Board. After the consent of the proposed land for the mosque, the board was handed over the authority letter. In the records of Sohawal Tehsil, the same land was recorded in the revenue records after the mosque of the Sunni Centralwakf Board. Now after the land was registered in the revenue records in the name of Waqf Board, the Tehsildar constituted a committee for metering under the chairmanship of Naib Tehsildar. Seven accountants were included in the committee for measurement. This five-acre land is bordered by the Lucknow-Ayodhya highway and the Raunahi police station. The agriculture department is currently paddy crop on the land measured for the mosque.

Trust made for the mosque

The Sunni Central Waqf Board in Ayodhya has formed a trust for the mosque, hospital and Indo-Islamic Cultural Center on the land found for the mosque in Dhanipur village. The trust will collect funds for the construction of a mosque, hospital and Islamic cultural centre here. For this, the trust is also going to open two bank accounts. In which donations can be donated. One of these bank accounts will be for raising funds only for the building of the mosque. The money will be deposited in the second bank account for the hospital and research centre built in the mosque enclosure. A portal will also be made to keep all the details of the amount online. The company has also been set up for this work. A domain named k iicf.com has also been registered for this portal.