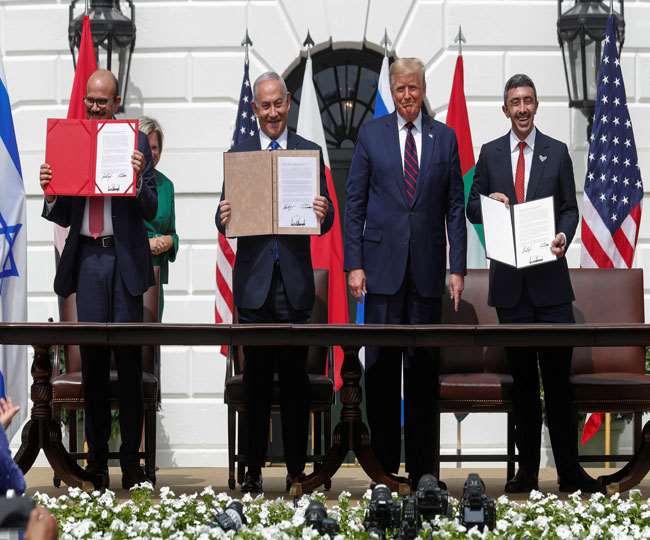 New Delhi, AP / AFP. The Arab-Israeli dispute ended on Tuesday after a long time. For this historic agreement, a grand ceremony was organized by US President Donald Trump at the White House, which was also hosted by Trump himself.

Also special 700 people were also called to witness the historical moment. After signing the historic peace deal at the White House, Israeli Prime Minister Benjamin Netanyahu has said that the Arab-Israeli dispute ended forever with the agreement that normalized the relationship. During the signing ceremony of the agreement, Trump said that it is like a new morning for the countries of the Middle East.

He said that after decades of division and struggle, we have started the new Middle East. Congratulations to the people of Israel, United Arab Emirates and Bahrain. Despite the coronavirus epidemic there was a large crowd on such an occasion. Addressing the crowd, Netanyahu said that today’s day has been recorded in history. Now a new relationship will begin between these three countries. The three countries will work together for the progress of their region and the millions of citizens living here. This agreement will bring a new dawn of peace. At the same time, it also hoped that further Arab countries would also join it.

UAE Foreign Minister Abdullah bin Zayed thanked Netanyahu for stopping the election for peace and the inclusion of the Palestine region. While the agreement was being signed at the White House, two dozen rockets were fired from Hamas-controlled Gaza Strip into South Israel. After this, on Wednesday morning, Israel launched counter-airstrikes on Gaza.

Donald Trump’s son-in-law and advisor Jared Kushner has led the negotiations, saying that while this is a major achievement for the countries involved in the agreement, it has created a ray of hope in the region. We need to focus on the dynamic future, forgetting the struggles of the past. He appealed to the people to move beyond the past.

Palestinian officials have expressed their displeasure over the deal, rejecting the deal. It is said that Arab colleagues have done daggers on the back. Palestinian President Mahmoud Abbas said in a statement that the agreement would not restore peace in the region. He said that peace, security and stability in the region would not be achieved until the Israeli occupation was over.