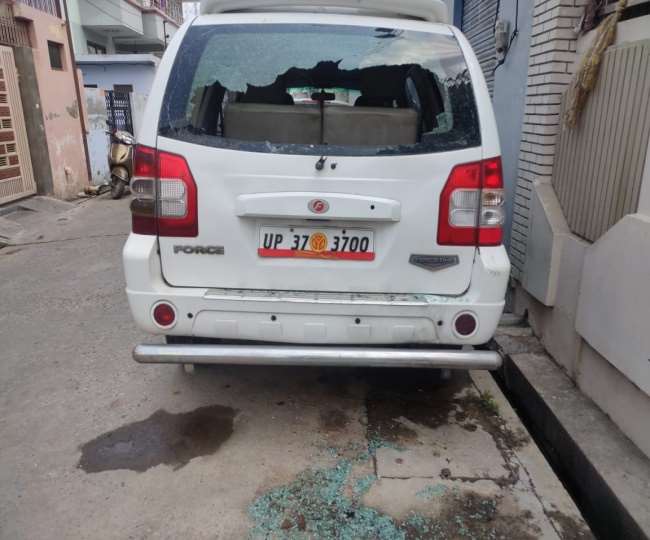 Hapur [Keshav Tyagi]. On Monday night, in a car parked in front of the residence of former Congress party MLA Gajraj Singh, resident of Mohalla Srinagar of Kotwali area, some chaotic elements tried to enter the house. However, could not succeed. On Tuesday morning, on the information of the case, the former MLA has given Tahrir in Kotwali and demanded action.

Former MLA Gajraj Singh, a resident of Mohalla Srinagar resident Congress Party, said that on Monday night, he parked his car outside the house on the roadside. Late in the night, some chaotic elements came out of his residence. The accused vandalized his car and broke the glass. The accused handed over a bag and valuables kept in the car.

The accused also tried to enter the house of the former MLA. But, after the surrounding people woke up, the accused fled from the spot. Kotwali in-charge inspector Subodh Kumar Saxena said that the case is being investigated on the former MLA’s Tahrir. Soon the accused will be arrested.

At the same time, the officials of Dr. APJ Abdul Kalam Social Welfare Society submitted the memorandum to the District President of BJP on Monday. In the memorandum, the officials themselves Demand for the statue of Dr. APJ Abdul Kalam. The chairman of the society Danish Qureshi said that the BJP government has given the self. Dr. APJ Abdul Kalam was made President. He gave the country a path to progress. This is why he is also known as Missile Man. He demanded that his statue be installed soon. After this, he has also submitted a memorandum to the District Magistrate asking for the statue to be installed.

On the other hand, the officials of the Jan Adhikar Party Uttar Pradesh submitted a related memorandum to the Governor demanding the resolution of all the problems including rising inflation. Party District President Sachin Saini said that diesel-petrol prices are touching the sky. The government has no control over inflation.